During the research phase of the project, students learned that West Virginia residents were interested in criminal justice reform and related legislation. Therefore, one campaign focused on following three bills from the 2019 West Virginia Legislative Session:

As exciting as it was to see all three of these bills passed in the 2018 legislative cycle, students knew that the work was far from done. In order to keep the conversations surrounding these reforms going, students created a thank-a-thon campaign during which they collected twelve videos from people who were affected by the three bills. These videos were compiled into one larger video that was sent to the West Virginia Legislature.

In addition, these students created social media pages, fliers, brand guidelines and an email database of over 1,000 stakeholders for the West Virginia Criminal Justice Reform Coalition. The students also drafted op-eds for four different influential members of the West Virginia community. Each was published in different areas of the state. 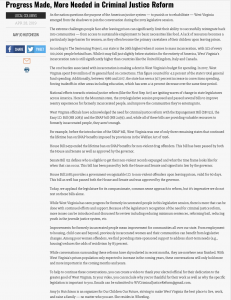